When Thomas Harrison deeded two and a half acres of his land to the public good in 1779 the City of Harrisonburg was born.

Harrison, the son of English immigrants, brought his family to settle in the Shenandoah Valley in 1737.  By 1778 the Harrison family had laid claim to land in the area that is now Harrisonburg and part of Rockingham County.  Harrison built a home on Bruce Street that is still standing today.  The Commonwealth of Virginia officially organized Rockingham County in 1778.

In 1789 the Masonic Order was formed in the City, making it the oldest organization still in existence in Harrisonburg.

Trustees governed the City of Harrisonburg until 1849 when a new charter instituted a mayor-council form of government and Isaac Hardesty was elected the City’s first mayor.  Hardesty’s council consisted of seven men representing the seven hundred citizens of the young city.  In that year Harrisonburg had 200 taxpaying residents and a budget of 237 dollars. (View the history of Harrisonburg City Council members.)

War came to the valley and to Harrisonburg between 1861 and 1864.  The City was passed through by both Union and Confederate troops.  On June 20, 1862 the fence around the courthouse was used as a stockade to hold Union soldiers taken prisoner in the Battle of Cross Keys.  The war was a tense time in the City.  Turner Ashby, a noted cavalry officer was killed close to the town’s borders.  While Harrisonburg and Virginia were part of the Confederacy, the City of Harrisonburg’s representatives in Richmond opposed secession.

Another 1,082 acres were added to the City in 1892 through annexation.  The move increased the population of Harrisonburg by three times to about 2,000 total residents.  The next year the town elected trustees to work with the Superintendent of Public Instruction to form a public school system.

The Virginia General Assembly established the State Normal and Industrial School for Women at Harrisonburg in 1908.  The school became the State Teachers College in 1924 and was renamed Madison College in 1938.  In 1977 the college took on the name of James Madison University (JMU).  Today JMU has over 19,000 students and employs nearly 4,000 faculty and staff members.

1912 saw the founding of Rockingham Memorial Hospital (RMH).  The hospital serves a five county area spanning the Shenandoah Valley and parts of West Virginia.  In 1994, RMH added a regional cancer center to its list of services to the community.

In 1916, Harrisonburg was incorporated as an independent city.  Four years later, the 1920 census recorded the population of Harrisonburg as 5,875.

What would become Eastern Mennonite University (EMU) was founded in 1917 as the Eastern Mennonite School.  The school became a four-year degree conferring institution in 1947.  EMU now has an active graduate school along with undergraduate and adult degree programs.

Efforts toward the revitalization of downtown Harrisonburg went into high gear in the early 2000’s.  Through the work of groups like Harrisonburg Downtown Renaissance and with the help of the city government, Harrisonburg is now a Virginia Main Street Community.  The City also has a National Historic District and a State Historic District.

More resources on the history of Harrisonburg:

For more information about Harrisonburg's rich history, visit our Tourism Office online or in person at the Hardesty Higgins House at 212 S. Main Street, Harrisonburg, VA 22801.

History of public safety in Harrisonburg: 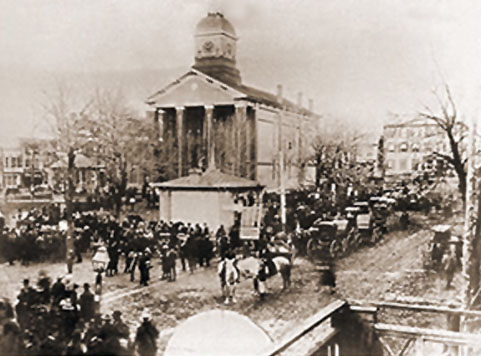